Dadiangas Baptist Church is a Christlike Church
with passionate worship
that touches the heart of God,
intimate and strong family relationship
that promotes development,
creative and dynamic leadership
that provides an equipping system
for integrated ministries,
and improved individual and corporate
financial management that maximizes resources,
which will bring about the transformation of the community.

Gensan's Sky will be a glorious sight like this on 11-1611! Photo Credits: Jet Siang

It is confirmed: 10,000 sky lanterns will be released on November 16, 2011 at the Oval Plaza, General Santos City in line with the celebration of the 8th People’s Congress. 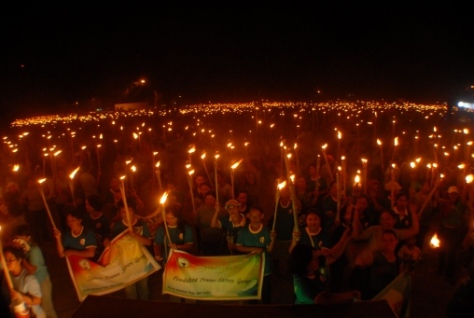 Thousands of torches during the 7th People's Congress

Last year, thousands of torches were lighted. It was like watching thousands of fireflies converging at the Oval Plaza. It was like a sea of flame engulfing the darkness. It was like blinking Christmas lights spread all over the area! What an enriching experience!

Magandang Gensan will behold an amazing sight like this on 11-16-11! Photo Credits: Jet Siang

This year, we will be releasing thousands of lanterns which will be referred to as prayer lanterns (coined by Rev. Andres Docena, Jr. of Project Management Group) during the big event which will be participated in by 35,000 members of the Family Resource Allocation & Management Enhancement (FRAME). FRAME,  a poverty alleviation program of the city, started with only 23 members in 2003 and have grown by leaps and bounds through the years.

Safety First: a proactive test of lantern release in the presence of officials from Bureau of Fire Protection

The organizers and representatives from the City Mayor’s Office , Project Management Group, City Social Welfare and Development Office, and partner agencies gathered at the venue tonight to test the lanterns and check the safety concerns. Part of being proactive, officials of the Bureau of Fire Protection and the Philippine National Police were there to witness the proceedings. We are hopeful that we will have good weather and clear skies on Wednesday so that the lantern release will be a success. 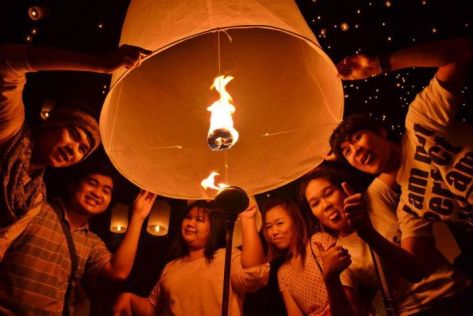 Jet Siang, my dear Aya, your fellow Generals will get to savor your Thailand experience right in Magandang Gensan on 11-16-11! Whoaaaa!

I am excited to host the event which will be directed by my dearest friend, Egai Cadiente. The big event will be a collaboration of thousands of Generals who are eager to re-imagine, reinvent and respond. My beloved husband has prepared his gears so he can take  photos of the actual event. I will certainly share with you stories about this spectacular event that thousands of FRAME members and Generals will soon experience in Magandang Gensan!

Children are the living messages we send to a time we will not see. ~Neil Postman

There is something about children that tugs my heart. Alright, I admit it, I am excited to bear my own children. I look forward to loving and nurturing my Isabel and my Jose Luis. While I am waiting, I make myself available to the ministry that paves the way for their coming and their growth.

As Creative Arts Director, I was tasked to handle the concert featuring Hannah Nissi Docena, Carla Geane Fernando and other talents of Dadiangas Baptist Church. So when I learned that the concert was meant to be a vehicle to launch our Children’s Church Project, I got energized to the maximum degree! END_OF_DOCUMENT_TOKEN_TO_BE_REPLACED

This Season of Peace, my Piao and I received a beautiful message via the sermon of Rev. Andres Docena, Jr. entitled “Embracing the Intention of Christmas”.

And just what is the intention of Christmas? END_OF_DOCUMENT_TOKEN_TO_BE_REPLACED